A native of Goodland, KS, Victor Nemechek graduated from Goodland High in 1971 and went on to attend Kansas State University while earning a degree in business. Continuing his education at the University Of Kansas School Of Medicine, he received his medical degree and graduated with honors in 1983. He completed his medical residency at Oklahoma State University. Dr. Nemechek was a co-owner of Bluestem Medical Clinic where he worked for 30 years until joining Sheridan County Health Complex in July 2016.

He has an optimistic attitude about the potential growth and availability of services the community may see in years to come including new specialists and advance medical services to eliminate the need for patients to travel. Dr. Nemechek planned to work in rural medicine throughout his medical career because he strongly believes that rural areas are better than city. In his free time Dr. Nemechek enjoys hunting, fishing, and spending time with his children and their families. 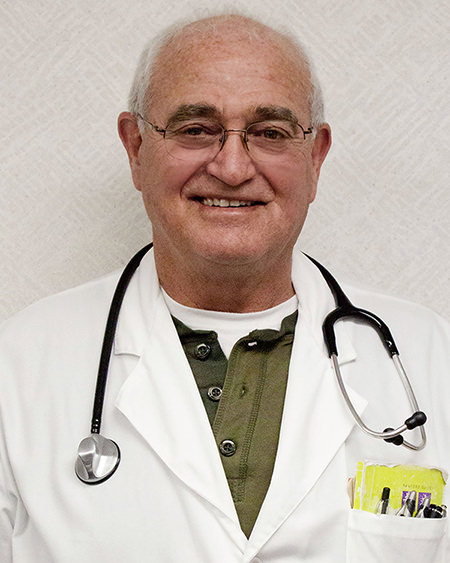 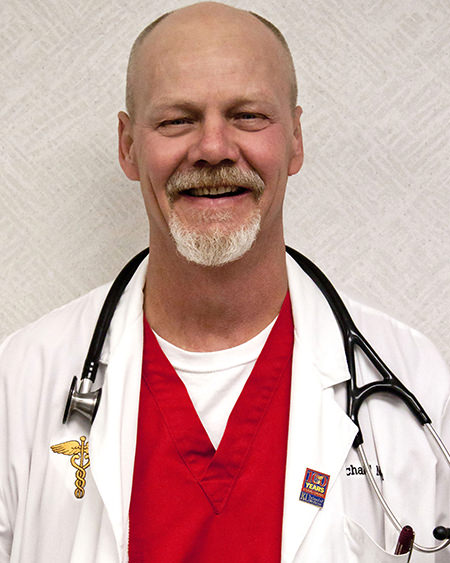 Dr. Machen has practiced in Quinter, Kansas since 1986 as a partner at Bluestem Medical and as a staff member at Gove County Medical Center. He also provides care at Sheridan County Clinic and the Russell County Emergency Rooms. Along with his practice, he also serves as the Network Site Director for the University of Kansas Medical Center in Northwest Kansas and assists in directing the preceptorship program and rural programs associated with medical education in this area. Dr. Machen received the Doug Parks Rural Preceptor Award from KUMC-Wichita in 1999. He received the KAFP Exemplary Teacher Award, part-time category in 2005 and then won the national award for Exemplary Teacher part-time category with the American Academy of Family Practice in 2005. He was also awarded the Rural Preceptor of the Year for the State of Kansas in 2008. In 2014, he received the Ad Astra Outstanding Volunteer Award.

Dr. Machen and his wife, Susan have four children and a grandson. Samantha Alsop is a 4th year surgical resident at KUMC, Benjamin is a KU graduate and now an accountant in Kansas City, Alaxandra is KU graduate with a MPH degree from Emory University and Edward graduated from KU with a degree in finance. Dr. Machen is an avid KU fan and enjoys hunting and fishing.

The Hoxie Medical Clinic and Sheridan County Health Complex are excited to announce that Dr. Dallas Walz, MD will join our Medical Staff in September as a full time family practice physician!

Dr. Walz is a native of Northwest Kansas, having grown up in St. Francis. He specializes in family practice, working at Cheyenne County Hospital from 2013-2018 and most recently in Salina as a faculty physician for the Smoky Hill Family Medicine Residency program since 2018. 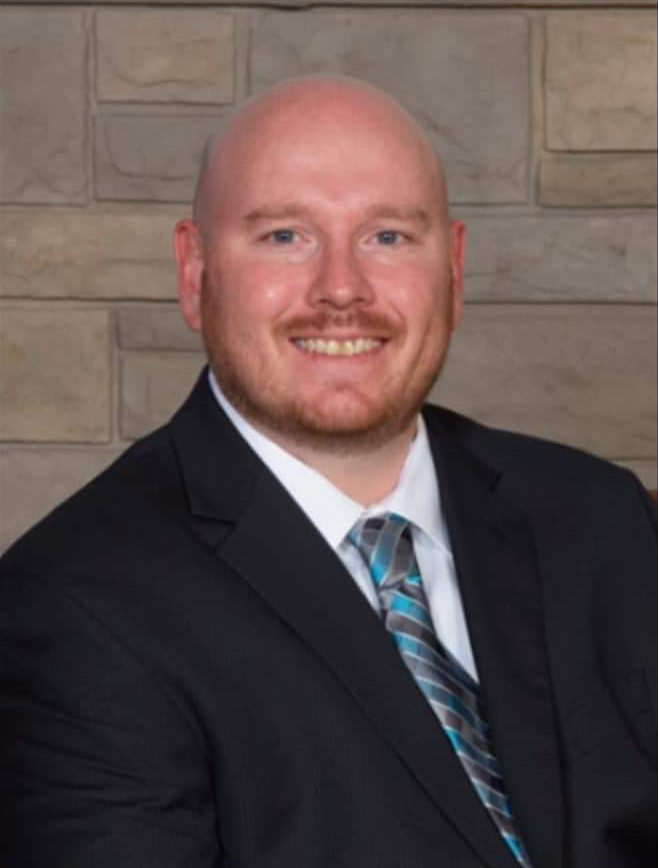 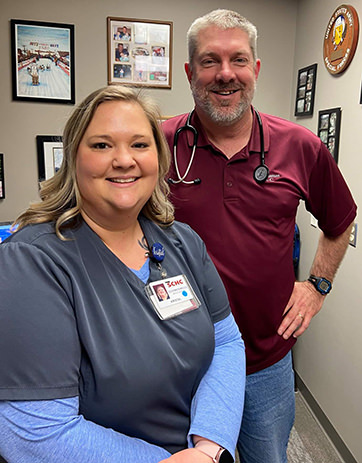 Chris with his nurse Kristal.

After graduating from high school in Washington state in 1979, Chris Hansen served in the Marines, and then in the Army Special Forces as a medic. His medic position inspired a love of medicine, so he separated from the Army after 16 years of service to pursue his education at Wichita State University. Chris graduated from the Physician Assistant program with his bachelor’s degree in 1999.

His first PA job was in Sharon Springs, Kansas. In his 20 years as a PA, he has served rural communities in Kansas, Alaska, Texas, and Utah.

Shannon was born and raised in Oakley, KS. She was part of the graduating high school class of 2004. She attended Colby Community College right out of high school but took time out of college to start a family. Her healthcare career began in 2008 as a hospital aide, further obtaining her CNA certification that summer. She returned to college in Colby in 2012, graduating with her LPN in 2013, followed by her associate's degree in nursing (RN) in 2014. She worked in many departments within the hospital system, filling in and training other staff members; Obstetrics, Labor and Delivery, ER, Surgery, to name a few.

In 2016, she transferred her career here to Hoxie, where she became a leader by training staff members and precepting new students.

In January 2018, she began her schooling at Frontier Nursing University in Kentucky for her Master's degree as a Family Nurse Practitioner. She graduated in October 2020 and is licensed within the state of Kansas. She graduated with Sigma Theta Tau international honors. Shortly after obtaining her license, she sat for national boards with the American Nurses Credentialing Center.

Family means a lot to Shannon. She has three children: Deagon, Deighton, and Kaelynn. They are her whole world. Some of her hobbies include watching football and baseball (KC Chiefs and Royals) and watching her children in sports. Shannon's goal in life is to be the best role model possible. Her mission statement is and always will be 'to treat others how you want to be treated.' 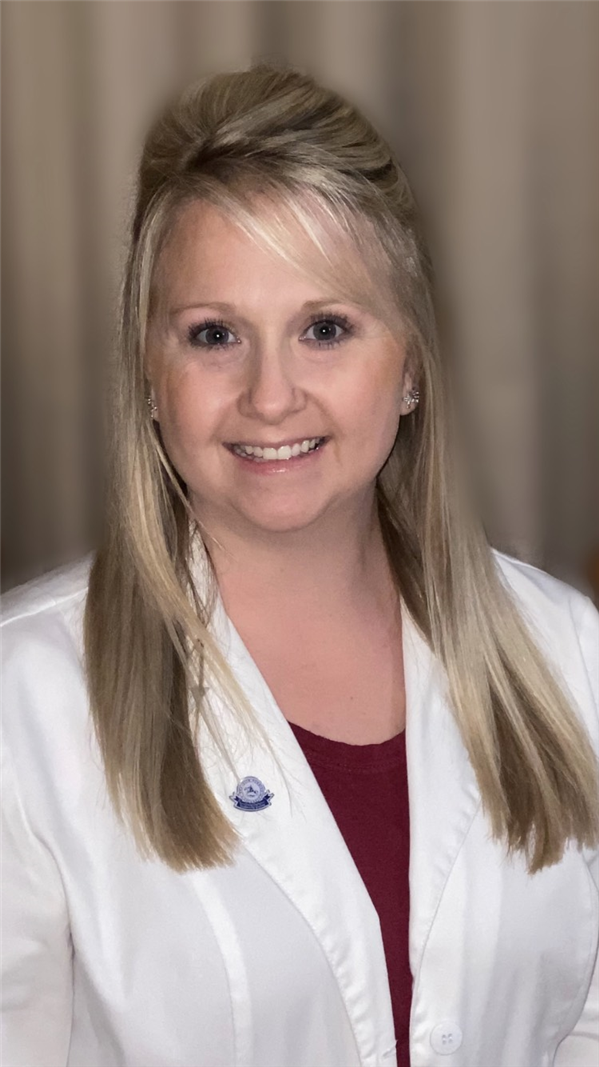 Jodi is a Clinical Social Worker specialist who attended and graduated from the University Of Washington School Of Medicine in 2012. She has over 6 years of diverse experience, especially as a Clinical Social Worker. Jodi also cooperates with doctors and physicians in medical groups including High Plains Mental Health Center. Jodi accepts Medicare-approved amount as payment in full. Call (785)675-3018 to request information (Medicare information, advice, payment) or simply to book an appointment. 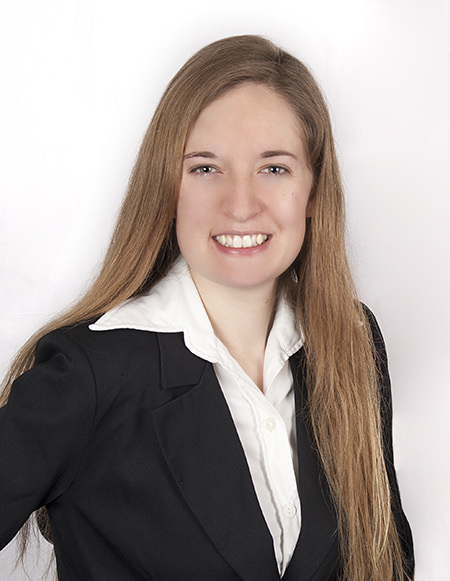